Market downturns are often a prime opportunity for buyers to take advantage of depressed economic conditions and acquire otherwise sound businesses. Many fortunes have been made by zigging when the rest of the world zagged, buying low and eventually selling much higher. This is equally true for Private Equity (PE) firms and Corporate Development teams at large companies, although often for different reasons. Economic instability can be a pressure cooker that creates divisive market forces, changing the dynamics in ways that benefit leaders and can bankrupt their followers. The rush down a falling stock market creates opportunities for well-funded acquirers to buy at the bottom and ride the wave back up the other side.

COVID is a little different in that the instability was tied to an external event that depressed all of the world’s economies simultaneously but for a limited period. The much discussed ‘V’ recovery has taken place in the markets, which saw a rapid drop a year ago and have since returned to their previous or even higher levels. Countries with high vaccination rates, like Israel and South Korea, are seeing aggressive consumer spending as people come out of lockdown and return to restaurants, bars, and stores with a year’s worth of built-up buying power.

A year ago, we knew little about how SARS CoV-2 spread, how to treat COVID-19, or how long this might last. As you might expect that uncertainty had a chilling effect on M&A activity globally, with companies and funds saving their resources to keep their businesses and portfolios afloat. Comparing the number of M&A deals from August 2019 to August 2020 shows a significantly slower market – down about 15% year over year:

As we travel up the V’s right arm, activity is starting to pick back up. A recent Deloitte survey of 1,000 executives at US corporations and private equity investor (PEI) firms between August 20th and September 1st, 2020 showed that more than half of the respondents (61%) expect M&A activity to return to pre–COVID-19 levels within the next 12 months. PE (and venture capital) firms globally are sitting on over $1.5 trillion of “dry powder” — unallocated funds that are ready to be invested (the term dates back to the days of muskets and needing to keep bags of gunpowder dry for a future battle). We can reasonably assume that their rate of acquisitions will increase, mirrored by a return to deal making by Corp Dev teams as their businesses move out of respond and recover mode. An early indicator might be the rate of Special Purpose Acquisition Company (SPAC) deals that are taking private companies public (including Sensei Labs customer UWM, who went public in January through the largest SPAC deal in history!). The $166 billion of SPAC deals in the 1st quarter of 2021 exceeds all of 2020.

The actual acquisition is only part of the story. A successful transaction requires not only a buyer and seller to agree on terms, but also to navigate the very difficult and treacherous Post Merger Integration. Bad integrations are often the cause behind failed mergers, including some of the worst in history. Consider the culture clash behind the failed Daimler Chrysler merger that saw Daimler-Benz pay $37 billion for the American company only to sell it for $7 billion less than a decade later. Or the infamous AOL and Time Warner marriage that was eventually dissolved and considered an utter failure.

Companies merge when there is an opportunity to drive shareholder wealth, usually by gaining market share, expanding into new markets, obtaining new technology or talent, or leveraging efficiencies of scale to improve margins. A pure focus on financial metrics ignores the much more difficult people side of the equation and virtually guarantees a failed PMI. To achieve those goals, the parties need to align early on philosophical outcomes, change management approaches, team structure, project plans, etc. Those decisions should happen as early as possible, often before the deal itself is even signed. Some of those points might even become part of the Due Diligence (DD) phase, considering the importance of culture and value alignment as part of the formula that defines a successful integration effort. PMIs need to move quickly to realize the benefits committed to boards and shareholders, so the integration teams need to be able to hit the ground running with committed team members, timelines, and project plans as soon as the deal is announced. A clear exit strategy for the integration phase is equally important — defining the KPIs that will measure success and define the end of the integration and beginning of life as a single organization is critical for everyone on the team to be able to measure status and progress.

Technology has been shaping and accelerating PMIs for over a decade. A 2009-era survey of 100 corporate executives from the Asia-Pacific, European, and North American regions already showed that 94% of North American and 85% of Asian mergers used technology as part of the PMI process. Close to 100% of PMIs are technology-enabled today, especially with the accelerated rate of digital disruption from the last year (three to four years of acceleration in a single twelve-month period).

Integration efforts are particularly complex challenges that require extensive enterprise orchestration. They hit on all four of the technologies of management we’ve designed Conductor around:

The legal and governance requirements for PMIs make all of this especially difficult. A prime example is the complexity of something as simple as scheduling a meeting early in the PMI process. Meeting requests often need to go through legal and PMO before they can be granted, meaning a complex chain of approvals for something that is usually as simple as sending a calendar invite. Delays in routine processes like that slow down the deal significantly, so even a little business process automation goes a long way.

Buy-side teams can also benefit from building out their highly repeatable processes as playbooks. Deal flow and DD often require the same steps over and over alongside a significant amount of data that needs to be tracked and compared to baselines. By encapsulating the tasks, workstreams, and data tracking into a template, firms can benefit from ensuring consistency across pursuits, gather data in a standardized schema for comparing and viewing at the portfolio level, and ensure compliance with any regulations and governance requirements.

It’s been our pleasure to help companies around the world successfully navigate complex PMIs across a variety of industries. The modern M&A transaction in the Enterprise Orchestration Era needs a platform built specifically to unite those four technologies of management into a single, easy-to-use application, already deeply integrated into the Microsoft Office 365 everyday tools. 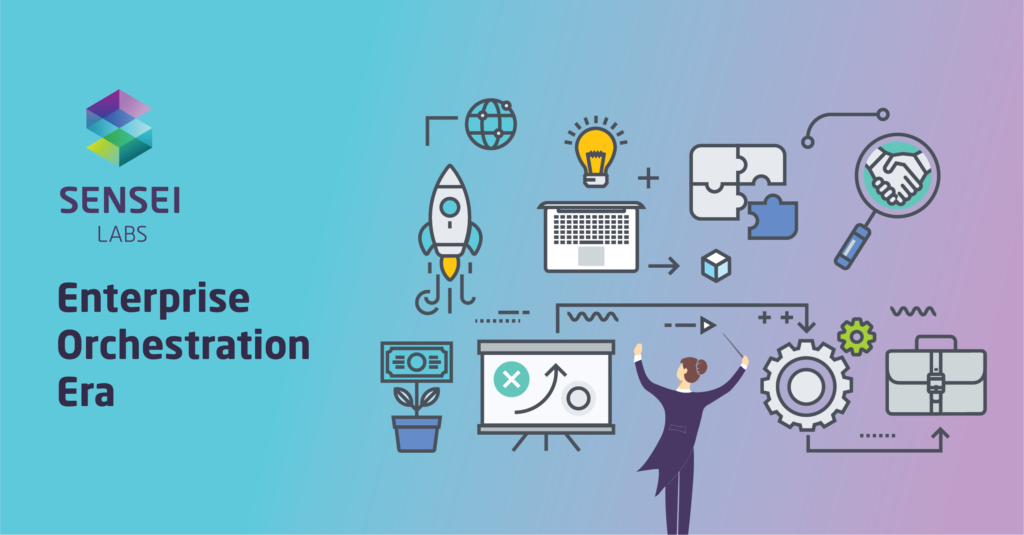 Join us for the on-demand webinar: Maximize Synergies: M&A Integration Orchestrated with Sensei Labs Conductor Platform. The webinar is part of our ongoing Enterprise Orchestration Era webinar series where we discuss our work with the various enterprise functions to better orchestrate their enterprise.  If you’re currently undergoing M&A activity or have it as part of your future strategic plan, we encourage you to join us so that you can learn how to be ready swiftly move on potential future M&A opportunities as well as to learn how effectively maximize synergy within your current M&A initiatives.

Fight the default energy of ‘No’, with Jay Goldman

Listen to a fantastic episode of #The Leadership Podcast where Jay Goldman, our Co-Founder and CEO, discusses how to develop engaged and high-performing teams by establishing a great company culture.

Learn more about our journey in the recent Startwell Podcast as Jay Goldman, CEO of Sensei Labs, shares the unique story of how the company got its start and the early success it achieved.

Forbes: 13 Resources Tech Leaders Rely On For Keeping Up With Industry News with Jay Goldman

Learn from 16 experienced industry leaders from the Forbes Technology Council as they share their strategies and lists of go-to sources for cutting-edge, reliable information.